In Focus: IS ALBANIA AT RISK?

On April 11th 2018, the Foundation “Qemal Stafa” organized the second Panel Discussion, focused on adapting the Albanian legislation with the EU Acquis.

Moderated by the Executive Director of the Foundation “Qemal Stafa”, Ms. Teuta Vodo, the discussion was conducted under the topic “The phenomena of violent extremism. How Endangered Is Albania?”

The panelists who provided their approach to the topic were the Head of the OSCE Presence in Albania, His Excellency Mr. Bernd Borchardt, Ms. Romina Kuko,the Deputy Minister of Interior Affairs and Mr..Enri Hide Prof.Dr.Asoc on International Relations.

As Mr. Borchardt stressed “OSCE’s efforts to prevent and combat violent extremism are major, starting from preventing these phenomena in prisons and probation services, supporting studies about the causes of radicalism in Albania, support for the Albanian authorities in drafting the national strategy in this area and the opening of the Center Against Violent Extremism, the inherent link between the prevention of these phenomena and the development of community policing, the need to involve all social groups, especially women, in this overall effort.”

He put forward the support for the Albanian authorities in drafting the national strategy in this area.

Ms. Romina Kuko pointed out that “Albania is not immune to violent extremism. To achieve sustainable goals in the fight against violent extremism, the co-operation of state and non-state actors at all levels should be seen as a priority “.
Meanwhile, Mr.Enri Hide gave a reflection of the division of terms and stressed that “There is a difference between violent extremism, religious radicalism and international (or transnational) terrorism.
The common denominator in all cases is the misinterpretation of the religion against legitimate violence. Thus, religious (Islamic) extremism is associated with a narrow, literal, intolerant and totalitarian interpretation of Islam. It believes in a single global Islamic state and in Islamic Law (Sharia).
Religious radicalism (or fundamentalism) is a process oriented towards the pursuit and interpretation of Muslim roots. It is often limited to Muslim societies, with an inward and non-expansionist nature. However, in some cases, it can take political proportions when these radical ideas are transformed into a political agenda of some groups seeking to fight for power.
Violent religious extremism shows some ideological and structural features closely related to the earlier features of religious terrorism, though some new aspects are added. Some key features of terrorism are a doctrine and an ideology whose purpose is to cause a sense of extreme fear and terror.”
Ms. Vodo concluded that this discussion is valid not only for the mission of the Foundation Qemal Stafa as a think tank but also to adapt to the demands of the region and the European Union. 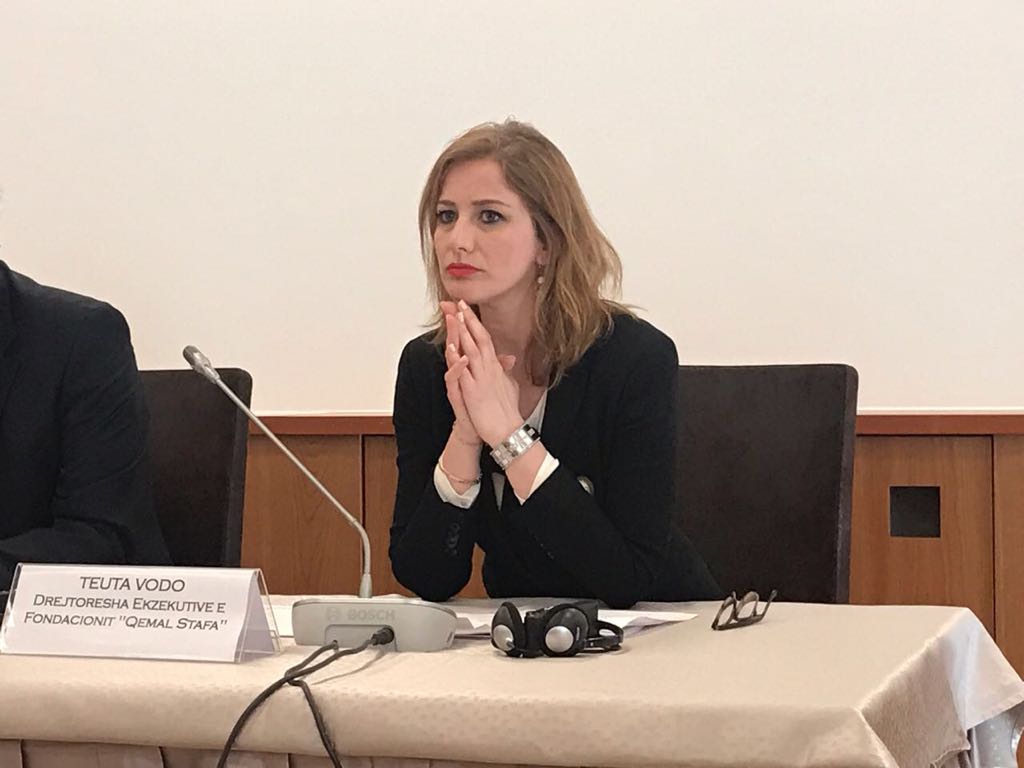